During June, my life has been a hodgepodge of sleep, weird eating schedules, and late-night runs to the school for internet. Each morning, I get sweaty just brushing my teeth. Each afternoon, my arms turn just a shade darker (I think you could now classify me as Pale Level 3, which is the same color as a polar bear who has been rolling in the dust). Each night, I crash.

While it's been nice to have an entire month to get situated, I'm kinda looking forward to the routine of language school, starting next Monday. (Officially, the placement test is on Friday, but I'm not certain I'm looking forward to that.) Another teacher has been going through the middle school curriculum with me, mapping out the coming year. This kind of planning makes my idealistic side kick in. I fall asleep thinking about books and writing and happy unicorns dancing on constellations, and it seems so amazing that I am the one who gets to be here. That I have all of those gray little brains to mold! These kids have hopped all over Europe and can switch back and forth between two languages, and I get the honor of spending nine months with them!

There are other nights when I fall asleep fearing that I will mold wrong. Like a failed Play-Doh artist, my attempts to sculpt minds will wilt all over the table like Dali's melting clocks. Maybe I'll end up like one of Narnia's dufflepuds, hopping around helplessly, only with one language instead of one foot. A monoling, rather than a monopod.

There are nights that I fall asleep instantly, and those are the best nights.

I suppose these are all normal first-month occurrences overseas. I have a feeling, though, that there will come some point when I look back on June 2011 and think, "Wait. Did that month ever exist? Was I awake for it?" But, yes, June is real because I have taken pictures of it. To celebrate the small victories of the past month, here are some of them. 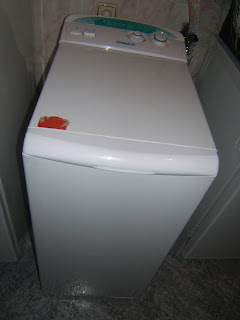 This is the washing machine. I finally did a load last week, and other than perhaps adding too much detergent, the whole thing turned out remarkably well--especially considering that our little washer looks a lot like a character from The Brave Little Toaster, which is one of the most frightening children's movies ever made! I half expect it to come alive at night and make its way to the local junkyard to save its friends (if there is a local junkyard, that is!). This is the dryer. Thanks, North Dakota, for teaching me about clotheslines at a young age! (My dad was a little concerned that I only brought three pairs of jeans. But if anyone is else wonders about my daily wear: I can't wear jeans at school because of dress code. I can't wear jeans in the summer because I will get heat stroke. I think I will wear jeans if I visit Germany. The last time I wore jeans was on the plane. Three suddenly seems a bit excessive. Also, I love dresses, and I love that Spain loves dresses.) 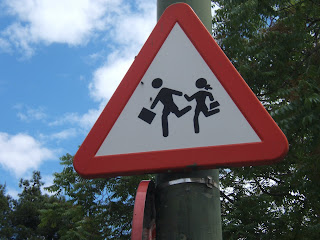 I have become almost completely pedestrian, which I also love! There are moments I don't love it, like when it's 90 out and the sun is reaching underneath my skin and stripping the first layer off. Other than that, walking is so wonderful because everyone does it. People are always out, always together. Families fill up pools outside. (Not many homes have A/C, but pools are as common as remote starters and block heaters at home.)

Getting into Madrid is a little tricky, as it requires a bus-to-train-to-metro commute, and the Camarma bus schedule is not always too convenient. However, when I think of the stress of the Spanish driving test--and all those traffic circles--I thank the good Lord for public transit. The last thing I want to do is figure out how to drive stick shift in one of Europe's largest cities!

Last week, it took me two and a half hours to get somewhere, mostly because my metro map was outdated and I had to backtrack. (Note to self: don't do that again.) At Atocha, I ran into some guys who were definitely American. There are three surefire ways to pinpoint Americans: their conversation, their huge backpacks, and the way they clump into huge tour groups at the metro stations. (I'm trying to be informational, not mean. Just to be fair, I will say that the fourth way to pinpoint an American is to stand in front of the big metro map in the station and see which girl is staring at it far too long. Because that girl will also be the one who sighs and heads back in the direction she just came from. And that girl will also be me.)

Anyway, these guys were very American, probably college age, but dressed as though they had just walked out of the 90's. One had the hair of Bill Pullman in While You Were Sleeping mixed with the hair of the oldest brother on Home Improvement. In the American spirit, I asked, "Where are you guys from?"

They just looked at me, obviously unenthusiastic about meeting a fellow outsider, and responded, "Texas. And you?"
"North Dakota."
"What are you doing here?"
"I'm going to be teaching this fall. I've been here about a month."
"That's about how long we've been in Europe."
"Cool!" And then I waited for something to happen, like maybe we'd all smile big, American smiles and wish happy trails upon each other. I was just about to say, "Well, have fun," when they stepped away. Not a step away to go somewhere. Just a small shuffle of a foot or two, just enough space to convey that the conversation had ended. I was later informed that this is weird behavior for Americans in Europe. But perhaps they were just overwhelmed, thinking that women of the future are far too forward. 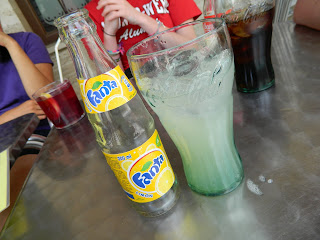 I have consumed more pop in the past month than I did in a year at home. This is not a small victory, but it's a fun fact. 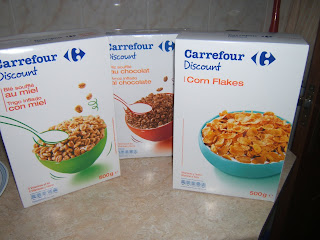 I have been able to buy groceries three or four times. This is to the credit of all graphic designers out there, who make products look consistent no matter the country. Perhaps somewhere there are boxes of milk that foreigners don't buy because they have pictures of bumblebees or something on them, but here, at least, I can always tell spot the discount foods.

Side note: If you bring a backpack or shopping bag into Carrefour, you need to seal it upon entry. That literally means that you put the bag in a big plastic bag, twist up the top, and run it through the little sticker tagger thing--like those used to seal up bags of produce. I've always had a strange fascination with office implements, so being able to seal up my personal items is the icing on the cake. I should start bringing in all my stuff: bag of documents, shoes, bookshelf. Bag it! Seal it up! Then take it home and open it all like it's Christmas Eve! And then...get kicked out of Carrefour forever, which means not having to buy groceries, which means saving money. This is the best plan ever. 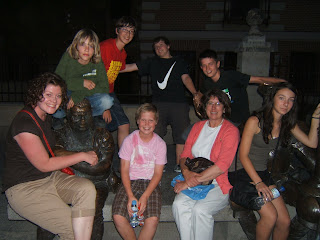 I've been tapas-hopping with the 8th-graders-to-be, and seriously, this is a great group of kids. TCKs have to make a lot of sacrifices. They have to live with tons of inconveniences, like leaving in the middle of the school year, or hopping from home to home, or even not being able to claim one culture for their own. But that mix of stressers and inconveniences can become such a blessing, can produce such maturity and such resilience. As I listened to these guys talk about their travels, as I watched one of them stand near the ice cream cashier to translate our orders in Spanish, I just thought, "Wow. Wow. They are so, so blessed."

Next up: July. Bringing routine, new toilets, and internet to house #34. 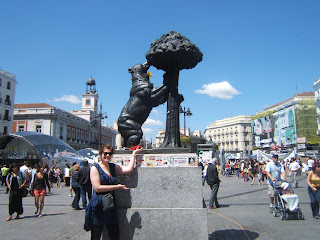 I hear you on the no dryer and heatwaves. I think some foreigners (me included at one point) seem to try to blend in with the culture around them so much that the sight of another foreigner is just detestable. Please don't be like! I had to break myself of this bad bad habit!