Carpet has no home in Spain. The floors are tile, and so my bare feet are beginning to bring the sand to bed with me. Ahh, just like camp!

I think I may be starting to get over jet lag. Now there are just two years of life lag to get over--then I will be a real human again! My brain obviously isn't totally awake, as evidenced by my attempt at buying a bus pass today. Even after some coaching from Jay, I managed to say, "I need a ticket for God trips." I meant "ten," not "God." The lady just smiled and said something about God not having trips. 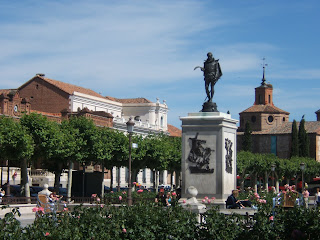 This is Miguel Cervantes, writer of Don Quixote. Mr. Cervantes was born in Alcala, the next city over from Camarma, so there's a statue, a plaza, and numerous other landmarks devoted to (or at least alluding to) him. Alcala is a pretty town, full of cobblestones and scary storks. And I got to see a small chunk of it today. Jay introduced me to the bus system and my soon-to-be language school, then let me explore while he was in class.

Let me say right now that God gives different gifts to everybody. Some people, they have the gift of cooking. Others, the gift of carpentry. Still others, gifts of swimming or engineering or spatial reasoning. I don't have any of those gifts, particularly that last one. No, God gave me the gift of...height. Maybe the gift of reading? Of idealism? A good eye for color? Are these even gifts?!

Okay, okay, I won't be ungrateful. I know there are many things I can do. The problem is, I seem to be defunct of certain important practical skills, like making a good pot of chili or fixing a lawnmower. But the area where I am most lacking is probably navigation. Hamsters have a better sense of direction than I do. Which explains how I ended up heading out of the Plaza, certain I knew which way I was going. Thirty minutes later, I was utilizing my gift of persisting-in-the-wrong-direction-because-it's-easier-than-turning-around, and I finally had to stop a Spanish grandma on the street to ask for directions. She was very adamant that I get to the right place, yelling, "STOP!" when I attempted an incorrect left turn. (I speed-walked after that, just in case she saw me take another wrong turn and realized I hadn't understood a word of her instructions.) Okay, see, I do have lots of gifts! I am very good at not asking for help until the very last moment. 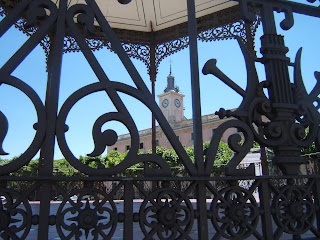 I was supposed to meet Jay at the golden Don Quixote, but as it turns out, I have the little-known gift of missing the bus, so we got another hour in Alcala. This is when I think of my good friend G.K. Chesterton, who once said, "An adventure is an inconvenience rightly considered." This is also the point where I commend Jay for using his gift of graciousness.

(Mom, you may be worried that you sent the wrong child to Europe. But it turns out that I was only off by blocks, not miles, and everything sounds more dramatic on the internet. Promise!) 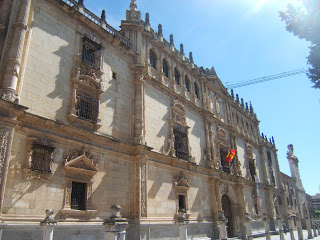 LOLOLOL. I just about died laughing about your misspeak on the bus. I may or may not be in an easy to amuse state of mind at the moment.

It sounds like you have also mastered the art of pretending to understand people when they speak to you because it's easier than asking them to repeat 500 times :P

Such is the life of us foreigners...

You made it back to enjoy another outing to Alcala, and points beyond! You soon will enjoy those mugs from SB Madrid--here's to more unplanned journeys!:) Fun reading too:)

Oh Shar, I love to read your writing, it humors me so. Anyone who knows you can testify that you are not good at directions. I loved your quot from K.G. Chesterton. Best wishes as you find your way around. <3