In July, Caitlin, the Welsh men, and I decided to visit the rose garden on the edge of Casa del Campo. It was evening, and the garden was empty. When we tried to leave, we found that the gate was locked. No, both gates were locked. The fences were too high to scale, and even if we had tried, we'd have had to get over the hedges first, and then over the giant metal spikes at the top.

Near the entrance was a walled-off area that looked like someone's front yard, and in that front yard was an old man wearing a button-down shirt and boxers. He was filling water bowls for the birds. Assuming he was some sort of park employee--since most public gardens do not allow men to take up residency, especially just in boxers--Caitlin asked if he had any keys. He ignored us, instead cradling a bird in his hands, cooing, "Hola, pajarita." He turned then, holding the bird out toward us in a horror-movie kind of way where it got all fluttery and his grin became frenzied, and we shrieked and ran away until, seeing no other option five minutes later, we had to ask again. He grunted this time but made eye contact--and pointed us toward another gate on the far side of the garden, where a man with a whistle scolded us for not hearing the signal.

On the way to the bus station that night, Caitlin and Michael would also walk past a man who would lift his shirt to reveal the large sword stretching from his chest into his pants. 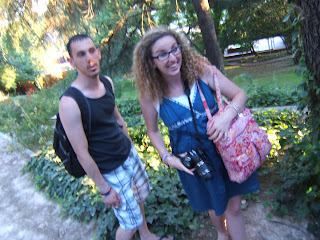 There were all sorts of men making eyes at adorable Sarah during our trip to Marseille, but our favorite occurrence was at a bus stop. We were sitting on the bench; an older lady stood near us. A man came jogging up, stopped to peer at the bus route map, and asked the lady some questions in French. After a minute of talking, he turned to us, smiled widely, and said, "Bye, ladies! 'Twas a pleasure!"

Runner-up: The man in Lavapies who, upon spying our pod of young women, called, "Hello, woe-man. Check eet out." We did not check eet out.

Sarah and I visited Toledo over Thanksgiving break. Toledo is bursting with beauty, from the stained glass in the cathedral to the old man in the souvenir shop who told me to just read the children's version of Don Quijote--same idea, more pictures.

Toledo's only a half-hour train ride from Madrid, but getting there proved interesting. When we left that (early) morning, we went all the way to Chamartin, waited in line for a very long time, and finally learned that we could only buy tickets from Atocha (which is several stations back). Oh, and while we were waiting in that very long line, an old lady asked, "¿Es el fin?" She just wanted to know if we were the end of the line, but I thought she was talking about the end of the train line and began rambling on about how we were headed to Toledo but weren't sure if we were standing in the right line! She, kindly, said nothing.

At Atocha, we were gently reprimanded for approaching the ticket desk without first taking a number; then we were smirked at for doing it right.

Once we got there, things went smoothly, except for the part where we ran down the hill so we wouldn't miss the train and sweated all the way home.

Runner-Up: The day before the Toledo trip, when Katrina and I chased a bus for several blocks in Segovia so we wouldn't miss the train home. The last time I ran that hard, I was in 5th grade. 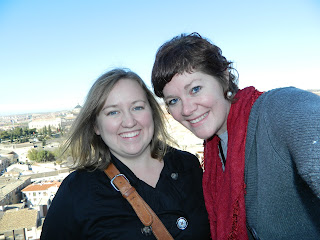 4. The German and the Goat

Street performers are abundant in Madrid. On a fine summer's day, several of the performers had abandoned their costumes in Plaza Mayor. The shiny goat, which usually sits upright and clacks its wooden head, was flat and listless on the cobblestone.

And there was a German man, camera in hand, who kept feeding coins to the goat's bucket, hoping that enough money would cause the goat to spring to life. Caitlin finally went over to explain that the costume was empty, and we watched the man move to the next photo opportunity: a table with holes cut for three heads to pop out. Unfortunately, the man didn't seem to notice that two of the heads were fake and the third one was missing. I'm not sure how much money those performers made that day, but considering they weren't doing any performing, it was quite a deal.

Thank goodness: as we left the plaza, we noticed our German friend in the far corner, feeding coins and snapping photos of (another) working shiny goat! 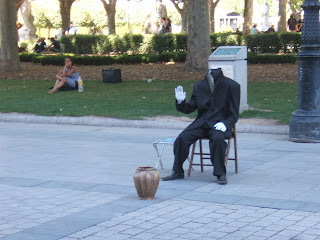 3. A Hello Kitty of Questionable Gender

Of all the characters you can find parading through Sol, Hello Kitty is one of the rarest. But we saw her one day--rather, we saw him.

Hello Kitty had taken its paws off to use the cell phone, and the hands poking out of that costume were large. Meaty. Hairy.

"Hello Kitty is a man!" Sarah shouted. And Hello Kitty, from ten feet away, cried back, "Is not a man! Is a girl!" before swatting Sarah with a balloon sword. 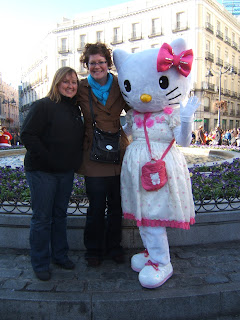 2. Dyeing in the Dark

The bathroom lights have been working only sporadically this week. So, of course, just as I started dying my hair a few nights ago, the lights went out, and I had to finish the job by candlelight. Baha! This story isn't really that great. It's just how my life works.

Before all these Spain stories began, I was still in North Dakota, still working with a darling little boy. I came into the room after lunch break one day, and he looked up from his coloring to greet me: "Hi, Shar."

"Well, hi," I said back, and then, jokingly, "Did you miss me because you just love me so much?"

He threw his arms above his head, caught my neck, and cried, "Love you!" Then, just as quickly, almost embarrassed, he went back to coloring.

And I knew for certain that every minute we spent agonizing over flashcard words and talking about how it's not nice to run people over with bikes had been worth it.
Posted by sharbear at 2:22 PM

'Cause you're amazing. Duh.