Cheering for the Toro

Spanish pueblos celebrate their own fiesta days each year. This past week, it was Camarma's turn. That means music blasting from the plaza every night (getting an early start at 11pm and ending at 3 or 4am, maybe). It also means that peñas take over the street (to my best understanding, a peña is a group of comrades that makes matching group t-shirts and hangs out together all festival, laughing and drinking until daybreak). And it means fireworks, cheap carnival toys, and Camarma's own running of the bulls. All this in honor of the town's patron saint, Nuestra Señora del Rosario (Our Lady of the Rosary). She would be so honored. 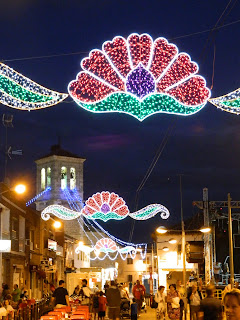 This morning, a bunch of us met on our friend Juliana's porch, which is situated directly (and safely!) above the bull-running route. Camarma's toro fest is much less dramatic than the ones you see on TV: our toros run three days in a row, four times each day, the runs taking place over the course of an hour--and there are no drunken Australians. Also, there are only two toros. The "motivator bulls" are released first, zig-zagging about 4 blocks before they meet and fire up the actual running bulls, who then plow through the streets with the runners (which, I would like to point out, are mostly men). 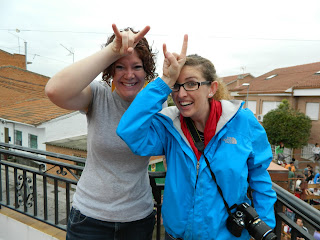 But this morning was a rainy morning. The streets were a little slick, and one of the toros slipped every single time he ran. First, he slid into a corner fence. The second time, he skidded on the pavement for several yards, and the third, he nearly crashed into a lamppost.

I hate when sad things happen to animals, and so on the sadness scale from 1 to Bambi, this definitely earned a Homeward Bound. 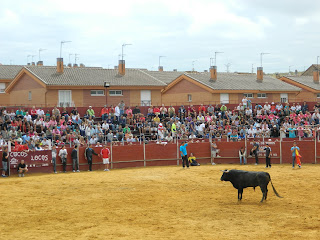 After the final run, one of the toros was let loose in a makeshift ring, where amateurs taunted him--and by "amateurs," I mean everything from random peña men waving t-shirts to rising matadors with their own personal mantle and sword.

At first, Friedrich was charging after them all, but then he got tired. (I have chosen the name Friedrich for this particular toro because it seems a noble name, the kind of name that one should have when they are forced to undergo teasing in the name of public spectacle. I mean, how sad to be forced into this big testosterone fest, especially when your taunters have the option of jumping behind a wall before you can peg 'em with a horn. I realize I'm anthropomorphizing a toro, but seriously, it's Friedrich! Get Friedrich a sword and some opposable thumbs and then we'll see who's brave!) 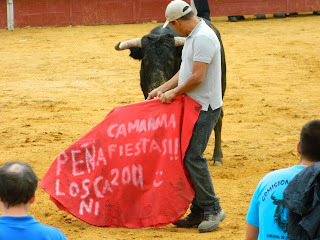 I really wanted Friedrich to get one of those guys. I mean, I didn't want him to cause major injury--just maybe a ripped shirt or a hole in their pants or something. I don't know for sure what happens to Friedrich once fiestas are over, but I have a pretty good guess--so he might as well go out with flair! And although Friedrich didn't get close enough to slice anyone's clothes off, he kinda got his comeuppance when he snatched away a mantle! 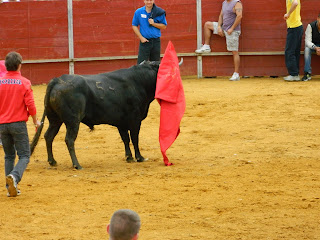 It dangled there on his horns for several seconds, then fluttered to the ground. Does Friedrich care about comeuppances? Probably not. I decided to care on his behalf. YAY, BULL! 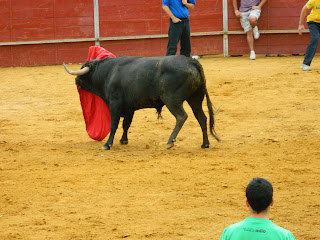 I may have said that aloud a few times, too: "Yay, bull!" I guess I said it softly enough, or maybe no one around me spoke English, since none of them gave me dirty looks or tried to punch my teeth out.

As we were leaving, my friend Will reminded me that you're not supposed to cheer for the bull. I just can't help it. I hate it when the deck is stacked against the helpless (human or bovine). And I like it when the underdog (underbull?!) comes out on top. So, even if I have to whisper it, I'm going to cheer for the bull. Good job, Friedrich. Good job. I hope your last moments were happy ones. GO, BULL!
Posted by sharbear at 7:59 PM