The world is bigger than the nation

One small problem with growing up in America is that we have a tendency to forget how much of the world has been around longer than us. Unless you are a Native American, you have immigrants not so far back in your family history. My own family has only been here for a few generations. My great-grandparents made their way to the prairies from Norway, Sweden, Germany, and Romania.

When I was in middle school, I disliked my geography class because we colored maps all day, and talked about topography and climate zones. To me, it didn't really matter, because we lived in North Dakota, in the United States, the center of the whole world. I wanted to see Scandinavia, land of my forefathers, and maybe some tropical islands. Nothing else, really. My world wasn't that big, and I didn't anticipate it getting much bigger.

But it did. It did because of Minneapolis and Guatemala, and now it's going to get bigger still, thanks to Europe, and I am catching a taste of what St. Augustine meant when he said, "The world is a book, and those who do not travel have read only a page." I understand that not many of us have the time or the resources to just take a gap year or even a gap week, but there's something to be said for getting outside of ourselves, even if it's just reading the world news. There is a huge world beyond what we know, seasoned travelers included, and it is worth knowing about: because the creative hand of God is at work in each place, in that "other" place; his image is pressed into its people and its foliage and its languages.

A book I just finished said something that hit me in the very core, basically that we (especially as white Westerners) do not bring God to the nations. God is already there. He may use us in the process, but not as the bringers, the superior beings who have a nice American God in our backpacks, a God we can distribute along with our American ideas and cultural norms and interpretations. No, if we go elsewhere, we go as co-discoverers. We are not taking God into that place for the first time; we are only to help others understand what already is.

He is, and he is everywhere. For Western believers, the world should matter not because it is a "great mission field" but because it is God's--and he loves that which belongs to him. We can't go to all those places, but I think that if we let him, he will start to open our hearts little by little to a deeper understanding, a deeper love for others, a wider perspective. Sometimes, it is easy to get caught up in being American--and there's nothing wrong with being American, unless we forget that most of the world isn't America.

P.S. I really like geography now. I wouldn't mind teaching it. Also, this map seems kind of important at present: 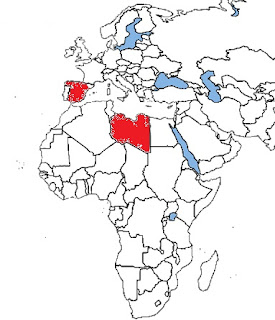 P.P.S. Reading is one of the best possible ways to travel without traveling. If you know me at all, you know that a recommended reading list is about to follow:
•Foreign to Familiar by Sarah Lanier (discussion of the difference between hot and cold cultures)
•Sold by Patricia McCormick (fiction based on the true lives of women sold into prostitution in India)
•The Guernsey Literary and Potato Peel Pie Society by Annie Barrows & MaryAnn Shaffer (fiction based on the German occupation of Guernsey Island during the war)
•The Book Thief by Markus Zusak (chilling fiction based on Holocaust events)
•Hope in the Dark by Jena Lee & Jeremy Cowart (a pictoral journey through sub-Saharan Africa)
•Zlata's Diary by Zlata Filipovic (diary written by a young girl during the siege of Sarajevo)
•Slumdog Millionaire isn't a book, but it's a heart-breaking, terrible, wonderful movie that anyone with a heart for Asia should probably see.

P.P.S. The BBC website is a really good place to go for recent news, and it includes no headlines about Justin Bieber, which makes it even better: http://www.bbc.co.uk/news/
Posted by sharbear at 10:48 PM

Zlata's Diary was my favorite book in 5th-8th grade! I was SO happy when I was in Methods and they were reading it in my 5th grade class and I got to teach lessons on it! :)