It seemed brilliant when we bought the tickets in March. I have been listening to the Wicked soundtrack regularly since spring of 2006, when my friend Anna and I would twirl in our dorm rooms to "I'm Not That Girl," using the extra mattress from my roommate-no-longer as a stage. After Will busted out "Popular" during supper at the Chinese restaurant in Álcala last fall, Sarah and I started discussing the possibility of seeing Wicked for real. Like, on Broadway. So when we found cheap tickets and flights in May, we booked! The only problem was that we had only a weekend to get to London and back, and our flight options left us with roughly 24 hours in the city.

London is its own special brand of magic. You don't even realize how London has seeped into the culture of your childhood: Narnia and Paddington and Hogwarts, Big Ben on every poster, your dad shouting "Penny Lane!" every time some Beatles imitation group asks for requests. Whenever I visit a new place, I look forward to it, but when our bus from the airport crossed the Thames and I saw the outline of the London Eye, my inner organs dropped to my toes in the fulfillment of every small-girl dream. I got anxious and giddy and started picking at the seat fabric because it didn't seem appropriate to yell, "LOOOOOONDON!" just then. 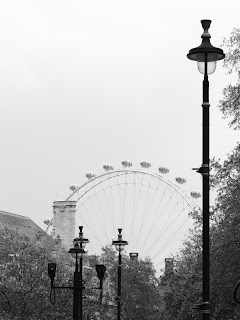 Before our 2:30 show, we'd seen guards playing a brass pops concert outside Buckingham Palace, Big Ben, the outside of Westminster Abbey. We hadn't even gotten into the city to watch Will wolf down his full English breakfast until 10am, so there wasn't much time to do anything fully, just shuffle down the sidewalk and gape at everything along the way. Like I said, 24 hours. The sweetened condensed tour.

And Wicked. Oh, Wicked! The lights! The frill! The dancing! I think my heart stopped multiple times. I had to remind myself to breathe, taking in those voices. Sarah would grab my hand and squeeze it at key points, or she'd slap my legs as one of our favorite songs started. The soundtrack of our school year! I can't remember the last time I felt so fully captured by something. I would buy that ticket and take that early-morning flight again, live it over a hundred times, even considering what came next. 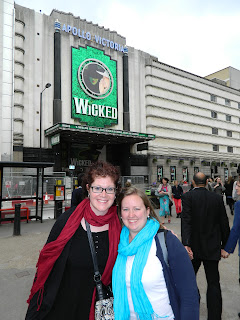 I know Spain's 8pm supper time is not usual, but I really wasn't expecting everything in London to close so early. By 5:30, the Tower of London was closed. Cafés, closed. Restaurants, closed. Subway! Closed! Maybe we were in a bizarre section of town or something; maybe we'd picked a secret holiday. Still, it wasn't until 9 that we found a little fish and chips place with an exasperated waitress. We'd hoped that maybe we could fit in some other magic before bedtime, this likely being Will's only trip to London and all, but when we left our dirty supper dishes for a final excursion to the London Eye, there was a disappointing lack of people standing in line outside. Because, like everything else that day, it was closed.

So we walked to Trafalgar Square instead. A drunk man was wading in the fountain, yelling, "I'm going to jail!" (I think that was a lie.) It just so happens that on this very night, the police were busy with more than drunken fountain waders, because on the 19th of May, the Chelsea football team was playing a match against Zurich, and it just so happens that this was the first time Chelsea had made it into the finals.

And it just so happens that on our one night in London, Chelsea won.

And it just so happens that our hostel was in Chelsea.

We'd spent an exorbitant £4.30 on a tube ticket earlier, so we opted for the No. 11 bus. On the top deck, Will turned to the guy behind him and asked, "Does this bus take us to Fulham Broadway?"

At his advice, we jumped off at the next stop to wait for the other No. 11--he assured us it was only six minutes behind. When No. 11.2 number pulled up, Will asked the driver about Fulham Broadway. "No bus is going there tonight," the guy explained. "Too full." He gestured to the traffic that was picking up around us: Chelsea flags waving from car windows, people chanting, "Chelsea! Chlesea!" while blasting victorious music, and drunk men running half-clothed into the streets to bang on car hoods and cheer with the drivers. "No bus is going to Fulham tonight--it's blocked off."

"Is there any other bus we can take to get there?"

"No bus will get you closer. It's all blocked off. And if you are going there, hold hands with these girls and don't let go." Yeah, as much as my students would like to see that happen, I wasn't anticipating that Will would grab our hands as he warded off Chelsea fiends.

On the upper level of Bus No. 11.2, Will again asked a guy behind him for help. "I'm getting off at [whatever stop]. That's as close as you'll get tonight."

"Then we'll follow you when you leave," Will decided. 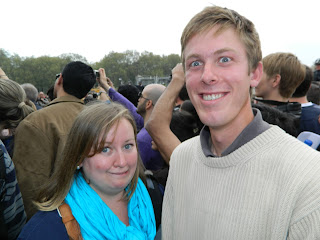 The bus stop was somewhere between Fulham and Complete Madness. Drunk Chelsea fans were stumbling in front of traffic, cheering, screaming, while cars backed into lanes at angles no sober person could deliberately make. Policemen on walkie-talkies exchanged information about someone who, we guessed, who was lost or dangerous or insane (or all three) and was probably the focal point of the giant helicopter floodlight overhead.

But where was our hostel? We went several blocks down a promising street, Will stopping anyone fully-clothed to ask if they'd heard of Bagley's Lane. All we got were a bunch of I don't know, man, I don't really live around heres. We turned back, tracing our path to the end of the road where we'd started, stepping around the same puke puddle for the fifth time. We flagged down a taxi to ask for directions, but the driver claimed he'd never heard of the street. It was back and forth on that street until a girl smoking outside her apartment warned, "Hey, people keep coming from that direction, complaining they've been hit with water bottles. I wouldn't go there if I didn't have to." Perfect. Victory and assault all in the same night.

The printed directions made no sense, no matter how we tried to interpret them. Our hostel was probably right in the middle of all this, the brawling and screaming, right at the tip of the helicopter searchlight, and the fugitive was probably in our room, setting fire to our sheets.

We'd been wandering for over an hour. Will stopped a random woman on the sidewalk, a woman who seemed fairly confident about the alleyway she was pointing toward. It turned out to be the right one. Our hostel was full of men watching game highlights, and we checked in at 1am.

Did I mention that we'd left the restaurant at 10?

Our credit cards were denied as we tried to buy train tickets to the airport for our 8:30 flight. I knew that if I fell asleep at 1:30, I'd never get up by 5, so I spent the night in the hostel lobby, keeping record of all the happenings on the back of a Starbucks bag. A mouse scuttled underneath the couches.

One more thing: I figured I should know where Sarah and Will were sleeping, in case they didn't appear at 5 and I had to shake them out of various stages of rigor mortis. Room 12, the guy said. We walked up the steps, up again, up, up, up to rooms 5 and 6 and 7, then 8. Back down again, 1, 2, 3, 4. Back up. Only 1 through 8. Back down, but then, oh, around the corner--a secret hallway. More rooms: 9, 10, 11. Back down the stairs, through the bar/lobby, someone was asking where the room was, the edges of my brain were entirely fuzzy, and then we were walking through a back hallway into an outdoor courtyard, where a bunch of guys stood around speaking French, and on the edge of the courtyard was room 12, dark and full of sleeping men.

My brain came unattached from my brain stem somewhere around 2:30am, but I remember reading a newspaper and watching the mouse. Sarah met me at 5:30, but Will hadn't appeared yet. She'd been the brave one, sleeping in the dark, dank man room, so I got to be the one to creep through the courtyard. To squint in the shadows that smelled like dirty man socks.

I had just figured out which bed was Will's when a soft alarm sounded. His silhouette turned over to me--me in some stealth dinosaur pose in the dark--and whispered, "Creeper." 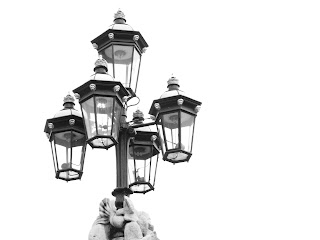 So we got no sleep but we did see Wicked, and it's all still worth it somehow.