No, I really am here.

I just don't have internet at my house, so the Smalleys are being my gracious web hosts.

So, I arrived in Madrid on Thursday morning, which is actually the middle of Wednesday night in North Dakota. And before I tell you about Spain itself, I need to mention the flight to Spain.

As a standby flyer, I got bumped from the 5:00 flight Wednesday morning, which left enough time for mom, dad, and I to make a McDonald's run for breakfast. The man at the airport asked me if he should pull my bags off this flight, since it didn't look likely I'd catch another plane until 1:13 in the afternoon. I didn't know what to tell him--my brain isn't even awake until 10:00am--so he left my luggage on. Oh, and he told me that if I took the 1:13, I'd miss the flight to Madrid.

That was sufficient to bring out a few tears. That and the thought of my poor, poor suitcases, riding around and around the carousel, abandoned by their master.

The second round of goodbyes was a little easier, as we figured I'd be returning to the airport and going through security at least three more times. Nope. I was the last one on board the 6:30. Then it was the 10:10 to JFK and the 7:40 to Madrid. (The layover in JFK included running between terminals to find my luggage, first to be informed that it was somewhere in the back, then that no, indeed, it had been checked all the way through. I went through security again, then curled up like a cat in the window of Gate B20 and took a nap-ette.)

It was business class. 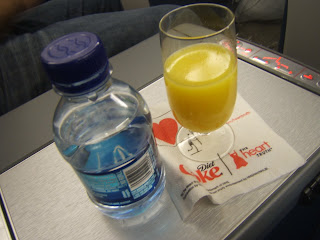 Business class made me forget all about the bumped early-morning flight. I forgot that I was on a plane instead of a magical space bus, and I kinda just forgot about any fear of flying in general.

But don't be jealous, for this was all to be followed by jet lag and sweat and the reminder that my Spanish vocabulary is at preschool level. When I get a chance, I will be posting pictures and stories that will probably make my life sound better than average, but the truth is that, no matter how hard you try, the internet is just a cutting-and-pasting of reality, and I will never actually be as cool as the internet might make me seem.

I'm so glad that you were able to make it there safe and sound. It seems as though God totally made up for all of the hassles these past couple of years by providing business class! congrats on your arrival!

I'm sorry I am just catching up (on June 2...lame, i know!). I have thought of you plenty though, and wondered how you are managing!