Day 1: Dan, Sheryl, Pat, and Jay picked me up at the airport. This was after getting the first ever European stamp in my passport, and also after an older gentlemen took my luggage off the conveyor belt, thinking it was his own. That, or perhaps he was drawn to the rainbow ribbons adorning the handle.

Day 2: I awoke in my little house on Calle La Manda, where all the houses look like this: 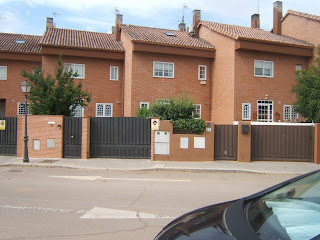 We have a front patio, a back patio, a basket of flowers in our fireplace, and a thousand knick-knacks on our walls. It's the Spanish way. 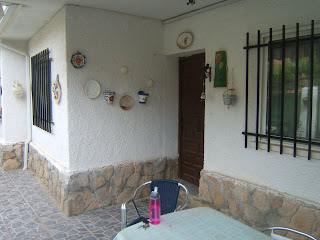 Lisa showed me around town, and I spoke my first Spanish out loud to a native Spanish speaker: "Es todo." ("That's all.") It's not that impressive, but hey, let's celebrate the little things. Also, it's true that Castilian is spoke with a bit of a lisp, so "gracias" comes out as "grathias." This could take some getting used to!

My first grocery store purchase: ham, bread, milk, juice, and, of course, cereal. I have a theory that anyone can survive anywhere if only they have cereal. I also have approximately 26 years of scientific evidence backing up this theory. 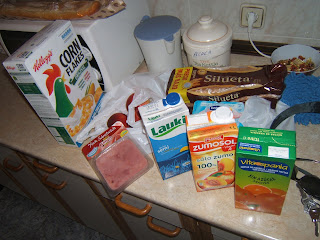 Day 3: Pat drove the Smalleys and I to El Escorial, a monastery/castle which is also the burial place of the kings (and the queens, too, but only if they gave birth to a son who later became a king). El Escorial is home to hundreds of paintings, including one by El Greco that was relegated to a room of less importance in its day. (The painting is of St. Maurice's martyrdom--but the king didn't appreciate that El Greco focused more on St. Maurice encouraging the brethren to remain steadfast in the faith and less on the moment of martyrdom itself.) 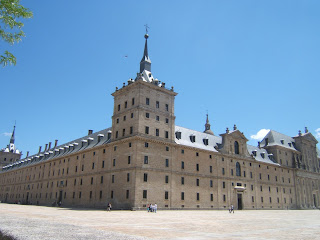 El Escorial also houses a massive, beautiful library and several mysterious gardens--mysterious mainly in the fact that we could not find the entrance to them. 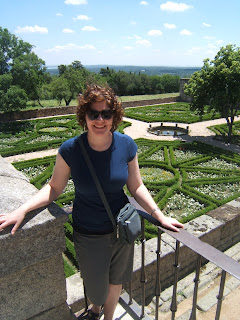 Day 4: I admit, I was already feeling a little sorry for myself on Sunday. After attending church and not being able to communicate with anyone who introduced themselves--except to tell them my name--I went home and thought about how I didn't have a car or the internet or a working Spanish vocabulary or anyone's phone number.

I kept asking myself, "What would I be doing if I were at home?" And the answer returned, over and over: "Taking a walk. Or creeping on Facebook."

Sick. Is that really what my life had come to?

Well, that was enough to jolt me out of my room. Thankfully, the good Caitlin (my temporary roommate) was outside on the patio, and she has enough adventure flowing through her veins to power at least twelve intercontinental airliners. The two of us wandered the streets of Camarma for a few hours before I went back to Smalley's in-home internet cafe. As it turns out, the internet is continuing on quite well without me. Who knew?!

Day 5: I attempted to recharge my phone at the Chino today.

Fun fact no. 1: With a Spanish cell phone, you only pay for the minutes you use (and only if you are the caller, not the recipient).

Fun fact no. 3: I know how to say, "Necesito mas minutos en mi telefono." I do not know how to say anything else that could potentially be useful in this situation. The guy behind the counter was very patient, trying to ask what service provider I use, while the sassy customer next to me started scolding me for trying to refill a phone without knowing my provider. Ahh, yelled at by a Spaniard in the Chino. Welcome to Europe!

This evening, we went to Carrefour, which is basically the European equivalent of Target. Oh, Carrefour, te amo! Hangers and laundry baskets and Scotch tape, oh my! 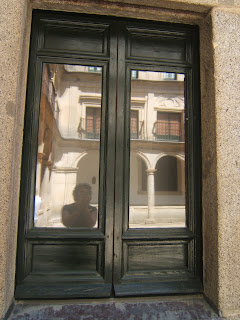 Finalmente, Jay has just informed me that Prince William and Kate are embarking on a journey to Canada and the US midsummer. Friends, if any of you feel like sending a package overseas, I hope you know that a prince is a sufficient gift. Always.
Posted by sharbear at 4:15 PM

HAHA... even a married prince, Shar? :P I'm a bit jealous as you sound like you are enjoying lots of adventures!

No, I understand that Will is no longer available. However, I hear that there are around 40 other eligible European princes...

Don't be too jealous. I spend most of my time sleeping. :)

I love how Chinese stores have the same name as my dog. :)