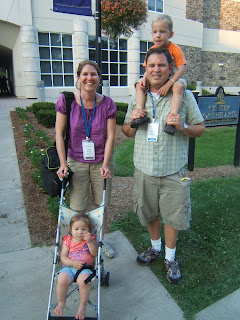 I met Jay and Lisa almost exactly a year ago in Colorado. We attended the same short-term/mid-term missionary training at WorldVenture headquarters, and we joked about the day we'd all be in Spain together, drinking café con leche.

(Also, I should mention that I flew to Denver from North Dakota. Though I had anticipated arriving at HQ a little late, I did not anticipate that the SuperShuttle from the airport would not be leaving for another hour after the plane landed. Nor that I would have to ride that shuttle for another hour before getting into Littleton. Nor that the shuttle driver would keep the heat cranked to 500 degrees Fahrenheit. Needless to say, I am late for everything in life, and perhaps this was just par for the course. I missed the supper in which all the other trainees got acquainted, as I wasn't creeping into my bedroom until somewhere after midnight.)

Yes, that was February.

We met again in July, this time in upstate New York. At a two-week training for over a hundred people who would be working with TCKs, the Smalleys, Pat Roseman, and I were the only ones headed to Spain. (Actually, Pat had already been in Spain, but we were so glad she came to the States for training. Why? Number one: Because she's awesome. Number two: Because she gave us inside information on ECA. Number three: Reiterate number one.)

(This time, I had planned to be in New York by 3:00pm, plenty early for any festivity. But...the plane out of Minot was delayed, and the flight out of Minneapolis had been moved up, so by the time I got to Minnesota, I had already missed my flight and been re-booked on a later flight to Buffalo. Six hours later. During those six hours, I bought some McDonald's and a luggage tag in the shape of a weiner dog. And discovered the best napping lounge in the Minneapolis-St. Paul International Airport. 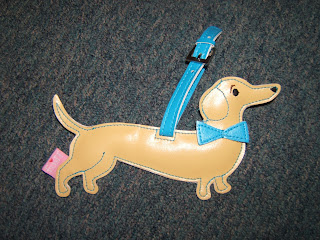 By the time I got to New York, I was late for everything. Late for supper, late for that initial bonding period. I had a ride from the airport to the campus, but we were waiting to take another girl with us, and her flight didn't get there for an hour. Instead of hanging around the airport, I went to Denny's with two of the men who were running the whole show. They asked me how I decided to do missions.

I told them about the book I'd read ten years ago, the semi-cheesy romance novel about the woman who teaches at an MK school in Taiwan.

One of the men worked at an MK school in Taiwan. "Who wrote the book?" he asked.

He smiled. "Ahh, Marilyn. She was a classmate of mine. I will have to tell her that! She'll be so blessed."

Jay and Lisa joked about me showing up late again. I'd really tried this time! Oh, well. We had two good weeks together in muggy New York heat, learning about TCKs and teaching approaches and thinking globally. But there was one thing that poked at me a little: everyone else seemed to have departure dates. Most of them already had plane tickets. A few weren't fully funded, but they were close enough to be confident: 89%. 97%. They were leaving for Budapest and Austria and Morocco and South Korea, and they knew exactly when. As we all hugged each other goodbye, it was with that fervency that comes as you go home from camp, fresh and excited, leaving one big thing to go to the next.

Except for Team Spain. Not that we weren't excited, and I can't speak for Jay and Lisa, but secretly, I knew that I'd have time to go home and debrief, and then probably to deflate. My funds were sitting at 44%. There was no way I could book a ticket for the next month.

At that point, I didn't know when it was going to come together for all of us. I don't just mean the five of us. There was our headmaster in Spain, waiting to finish writing teachers' schedules until he knew ours. There were people in the WorldVenture office, waiting to hear that our support numbers had finally been fulfilled. There were people at home, asking about timelines. Missions isn't an international trip: it's an event! Or a carnival, even, of supporters and teammates and roommates and parents and budget-makers and field leaders and teachers and principals and administrative assistants, and, oh heck, just about anything else you can think to throw in there (except for clowns--I will not allow for clowns).

So this fall, the fiesta continued. On my end, it involved being fully funded, then getting excited, then getting an unsigned FBI check, then crying, starting over, and waiting. And coming to terms with things. And realizing that it's okay; it's okay that everyone I met last summer is now in Europe and South America and Asia, because that was the right time for them, and when they are coming home, I will just be starting.

I'm so thrilled for them. We've waited a long time to get where we're going, and I am sososo glad that they are finally there.

And if Jay and Lisa are there, you know that I'll be following them. I'll be late, of course, but I'll be there all the same. :)

P.S. You can read the Smalley's blog by clicking here.
Posted by sharbear at 5:07 PM

This is a lovely story, Shar. I am so excited for you, but sad at the same time, that even though you live in ND and I in IA, and we have seen each other about 4 times in the last 5 years, I still like thinking you're close enough to see, but when you go to Spain, you won't be anymore. I know that's how it's supposed to be when we're following God's lead, but still, I miss the possibility of realistically seeing you. I am truly excited, though, for your dreams to come true!