When spring semester began, one of my friends from home facebooked me that she and a posse of girls were coming to visit. I, staring down the throat of a homework pile, wanted it to happen but didn't have any time to think about it happening. I hate to admit this, because I used to be one of those people who awaited every event--big or small--with great anticipation, and now I feel like there are so many things going on that I don't have time to anticipate. I just wake up and BAM!--the next event slaps me across the face and is hovering over my pillow, waiting for me to put on some clothes.

There was a Skype conference stretched across three different time zones, and there were facebook messages and tickets and lists of who owed what to whom, and there was always, "I can't believe we'll be in Spain in only three months!" Then, in two months. Then it was morning and I was at the airport with Alex, who'd flown in early from China to sweat out the last week of school here with me.

There they were: Sara from Alaska, Jen and Lauren from the NoDak (technically, Montana, but they've been here long enough that we've just absorbed them). Together at last. It's funny how you get to the thing you've been waiting for and forget about the stress it took to bring you to that point. I hugged them, and my brain stopped stirring with train schedules and flight paths. They were here. 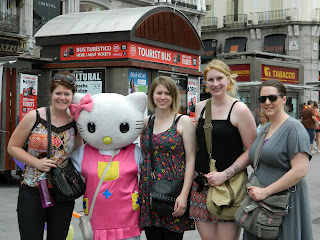 My friends, like most good Scandinavians, are tall people. The old Spanish ladies who pull their plastic chairs into the street to chat at night are not. As we passed a group of them on the way to Camarma Burger, one proclaimed (in a voice not soft enough for secrecy), "¡Madre mia! Los niñas son grandes!" Roughly translated: "Holy mother, the girls are huge!" Thanks for that, lady. Maybe we should set up a street performance booth titled Take a Photo with the Amazons.

The men in the rowboats at Parque Retiro also noticed the height thing. While Sara, Alex, and Jen were floating around, some guy kept trying to paddle closer, yelling, "Where are you from? Switzerland? Swiiiitzerland?!" I think sometimes my dad secretly worries that I'll end up married to a Spanish man, never to return home. Maybe he should worry. Make a girl feel big and white enough and you'll clearly capture her heart. 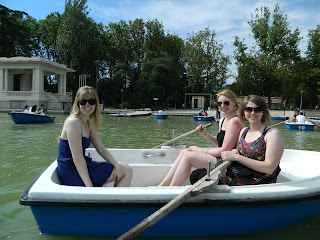 After two days exploring Madrid, we hopped the night train to Barcelona.

Here are a few fun facts about the night train: It was hot. No one checked our tickets until an hour into the ride. We didn't sleep.

There was a lieutenant.

I never saw him, just heard that voice scratching me all over. Not scratchy like a cat. Scratchy like a man with an unkempt beard who insists on rubbing it against your face. From the other end of the train car, we could hear him impressing a giggling posse. He said he was sixteen, a lieutenant in the Air Force, a member of search and rescue who'd been emancipated from his parents and was now traveling around Europe alone.

At first, it was amusing. I'd peel off my eye mask to see Jen shaking her head. She'd lean back, whisper, "Did you hear what he just told those girls? We should go tell them the truth!" In America, he'd said, all the security guards at airports walk around with machine guns, and people knock on windows before they rob you because it's a signal to get out. The girls' laughter induced story after story, each starting with, "In America..."

When the train got to Barcelona at 7:30am, The Lieutenant had finally fallen asleep. We weren't sure if it was his final destination, but since we weren't in America, we didn't wake him. Happy trails, Lieutenant. 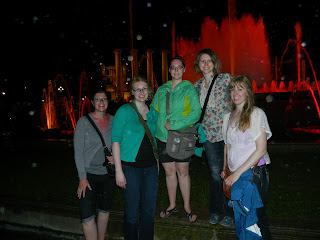 Barcelona is a beautiful city: Gaudí, the Mediterranean, Magic Fountains near the '92 Olympic Village, a cosmopolitan heartbeat, wide sidewalks, and men on Las Ramblas who counter your rejection of their restaurant flyers with "I can make you very happy!"

In this case, pictures will tell you more than a chronology of landmarks. Except we found Nutella icecream, and I don't have a picture of that. 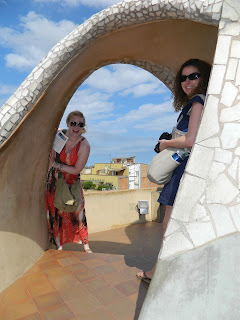 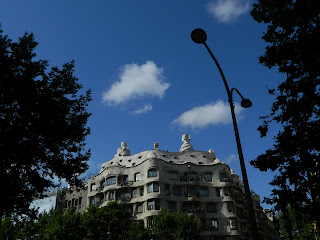 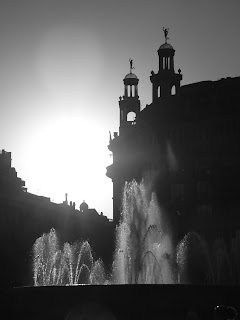 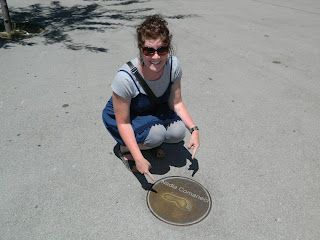 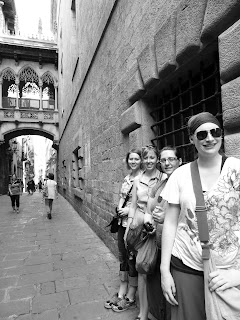 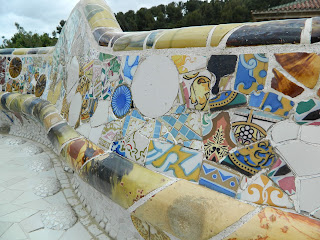 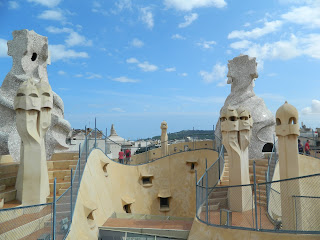 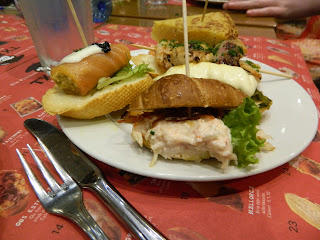 Next stop: London. This time sans trains and lieutenants. London is a fairy tale place, and that's probably because it is ingrained in the American conscience from a young age through fairy tales. Whenever someone asks about my favorite city, I usually say Chicago. My parents think Chicago is big and dirty and don't understand my sparkling affection for it, but I spent two college fall breaks driving to Chicago with one best friend to visit another best friend--Hottie the Hog Dog taped to our back window--and Chicago become my other best friend. (Does it defeat the purpose of a best friend to call all your friends best? Yes, semantically, I would agree that it does. But I will not stop using the phrase because it still fits each one.) I have seen several new cities this year and liked them all, but London! London is the new Chicago. London is the grown-up Disneyland. London is that boy you see across the room during the Band Day dance when you're fifteen, that you find yourself still thinking about at twenty-five. Except that London has an accent and knows his history and dresses in dashing suit coats.

We spent only two days in London, which was a shame since it was so rainy and overcast, perfect relief from Spain's biting sun. 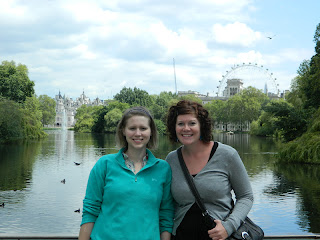 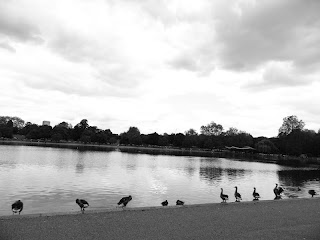 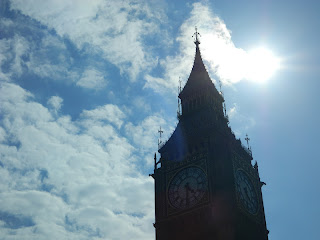 We had big London Eye plans, even though Lauren wasn't thrilled about the idea of being trapped in a giant plastic capsule rotating thousands of feet above city and water. It'll be fine, we said. It'll be fun, we said.

It was fun. It was fine. Some guy from New Zealand was trying to catch Alex's attention, and we were walking all around our capsule, snapping photos of London at every angle.

The Eye stops briefly, regularly, on its 40-minute rotation, letting old customers off and new ones on. But we had been stopped for several minutes, one capsule stop away from the very top, and Lauren looked over at me. "We've been stopped for awhile now."

A voice came over the capsule speaker just then: "A rescue team has planned and prepared for this eventuality. A trained rescue crew will be with you shortly. Please follow all of the instructions of the rescue team." 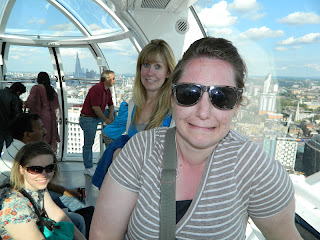 Minutes passed. We laughed it off, took advantage of the great camera shots. The New Zealander kept his eyes on Alex. Some guy from India offered her a can of pop.

The pleasant speaker voice returned: "We will now reverse the wheel."

And it was okay. Until we stopped again, about a quarter of a way from the bottom this time. "A rescue team has planned and prepared for this eventuality."

Aw, crap. There were no ambulances, no sirens. No one had pulled out a glass cutter and attempted to jump from the top of the Eye. But my imagination was painting horrific pictures of helicopters with rope ladders, of my hands sliding out of a trained rescue worker's grasp, plunging like Icarus into the Thames. Not even a wax wing to blame it on, only an insatiable tourist heart.

The rescue workers never came. No sign of any true emergency. We didn't get all the way to the bottom, because our speaker voice soon informed us that they'd be restarting our "flight." Yes, that meant another entire turn around the Eye. Lauren called it her worst nightmare. I call it getting more for your money. But I do think there should be a preliminary message for not-so-serious occasions, something that doesn't cause instant heart failure. You know, like, "We are experiencing a slight delay. Your flight will resume shortly." Is that so much to ask? 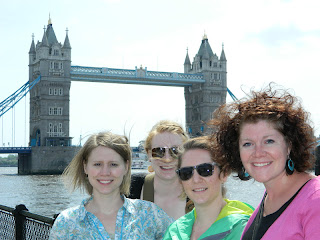 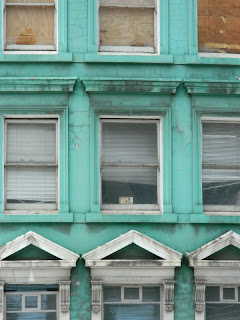 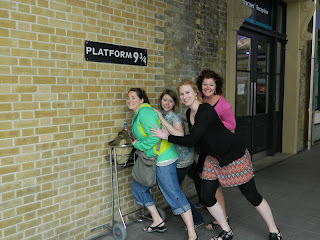 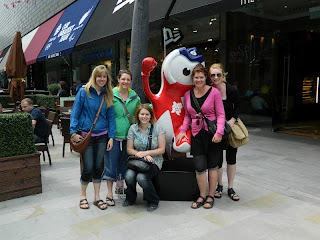 Day 2 was just as magical: Tower Bridge, Platform 9 and 3/4, the Olympic Village. (Thank you, Bela Karolyi and the 1996 Women's Gymnastic Team for lighting an eternal Olympic torch in my heart.)

At King's Cross Station, we found ourselves in need of directions, so Lauren and I walked up to the information desk. The guy behind it--an older version of young Stevie Wonder, if that makes any sense--was laughing. Laughing! "Um, how do we get from here to [wherever it was]?" I asked.

He laughed to himself for a few more seconds. "I'm sorry--you're so beautiful I didn't hear a thing you said!"

"Um, I'm sorry!" And I repeated my request, whatever it was. As we walked away, he called, "Just keep doin' what you're doin', ladies. You'll make people go deaf!"

So even though he was probably just in shock at how big this crazy hair can get when windblown, it was kind of nice. Nice enough to write down. Nice enough to remember when mostly the only thing you hear from men is "Switzerland? Swiiiitzerland?" and that usually only when surrounded by tall blondes. 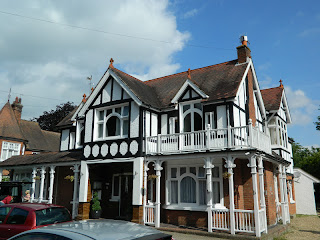 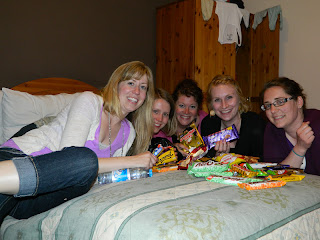 Upon our return to the world's cutest hostel in Horley, the girls decided that it'd be futile to exchange their remaining British pounds for Euros. Instead, we returned to a convenience store we'd frequented the night before and began pulling chocolate off the shelves. Skittles! Crunchies! AeroBars! All the Nestlé products they don't sell in Spain! I deposited my handful on the counter, an exchange for my last piddly pocket change. The cashier looked at me. "Oof."

He shook his head at us. "You've got money left--you should be at a pub."

"We're Americans," Alex explained. "We like to get fat."

Our mothers are so proud. 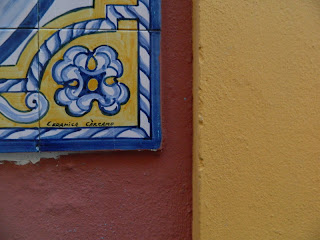 The final map dot in this whirlwind was Sevilla: color, joy, and curved arches. The afternoons were so hot that they forced us onto siesta schedule: mid-day naps, late-night tintos. And as we sprawled across our hostel beds and laughed, I missed it. I missed it even while I was living it. 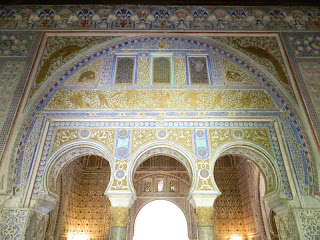 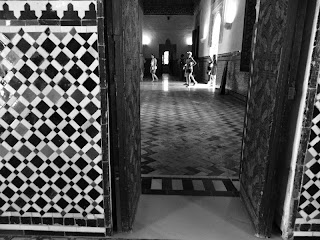 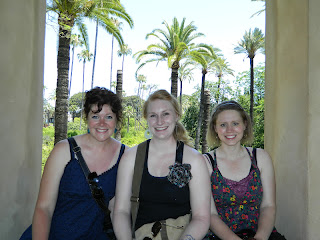 It's easy to go to a new place and tuck the old away. You don't turn it off entirely, just accept that this is the way it is now. You get used to talking about your life in past tense while trying to pull it into the present. And then, when the different worlds bump into each other, pieces of old scrape off on the new, and suddenly you remember everything. You remember turning the furniture into percussion and waking up to "I have a horse face! Horse face! Bird horse, bird horse!" coming loudly from the bathroom, and you remember talking at midnight with the girls who know everything about you.

I took them to the airport, crying my goodbyes because they're all going home to new, different places, too. When I get home, wherever that ends up being, nothing will be as it was. I mean, nothing ever is anyway. But I have felt the collision of the worlds now; I want to know again the jarring of intersection, of being pulled back into someone's orbit, because, for the first time truly since coming to Spain, I felt a little homesick. 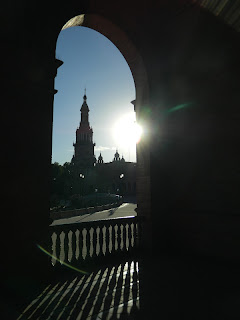 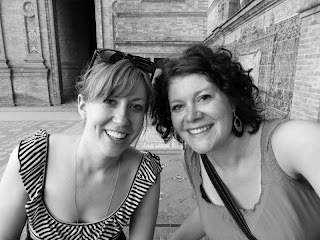 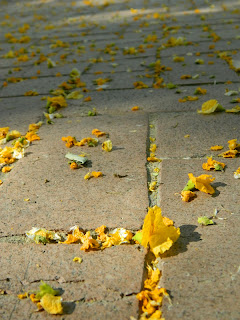 Thanks for the laughs! :) What fun experiences you have had and I love the way your express yourself. you draw me right into the story!